Gardening Journey
Home Landscaping How Fast Does Bamboo Grow? Know It Well to Grow It Well 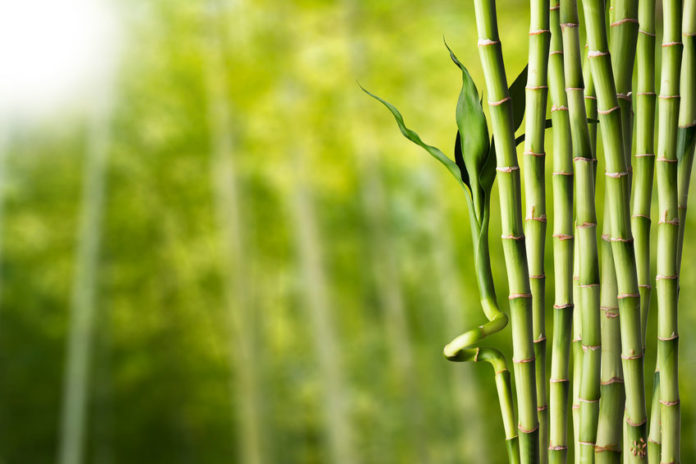 Maybe you’ve heard or read that bamboo is the “fastest growing woody plant on earth.” But maybe you have a plant that’s just sitting there, and you would beg to differ. So how did bamboo acquire this description and is there any truth to the statement?

The Many Species of Bamboo

Bamboo comes in many shapes and forms. It might be in a little container on your desk, an unusual, miniature arrangement that was a gift, containing bamboo shoots along with cascading ivy. Or perhaps you’ve driven by a landscape with rows and rows of tall and crowded bamboo shoots springing from the ground.

If you think those are different plants or at least different varieties, you’re most likely right. More than 200 species of bamboo grow on the North American continent alone. You may not have a bamboo plant in the container at all. Dracaena sanderiana, sold as Lucky Bamboo, is not a member of the bamboo family.

Bamboo has an unusual growth rate and habit. Growth typically occurs when the plant becomes established, usually near three years. Depending on its variety and location, bamboo, actually a member of the grass family, does all its growing each spring within an approximate 60-day time frame.

Bamboo is a colony plant, growing in sizeable patches if left to its natural development. It grows from underground rhizomes, and there is no secondary growth on this plant. During the growth period, it produces new shoots and canes. Canes spring from the underground root, similar to Iris and Dahlia, which also grow from rhizomes but certainly not as abundantly as bamboo.

How Quickly Does It Grow?

During the time of growth, called a shooting period, it is estimated that a bamboo plant can grow four feet in 24 hours. Yes, this fact proves that bamboo lives up to its name as the “fastest growing plant.” When the cane reaches its height for the season, you’ll see sprouting along the cane and soon leaves begin to unfurl.

There are many good reasons to grow bamboo in your home garden. Here are some of the most prominent ones:

The Flowers: This plant has an unusual look because of the canes and foliage. And then there are the flowers. If you’ve not seen a flower on the plant, you are not alone. Some varieties only produce a flower every 60 to 130 years. This type of bloom comes from Gregarious flowering and often, it is the final act of a finished plant.

Some suggest that the plant does not always die after producing this kind of flower, but most agree the demise of the plant is likely after Gregarious flowering. The plant has passed maturity, and its lifespan is over.

Sporadic flowering, when blooms appear intermittently, is because of ideal environmental conditions that resemble the original conditions from which the species came. And some colonies of a few varieties bloom annually. While this is unusual, it does happen. The death of the plant is not common following these two types of flowering.

Erosion Control: One of the best plants to hold soil in place on a hill or other area that washes, bamboo is also ideal for planting in the forest before clearing trees. As it grows from the underground rhizomes, it will continue to return, stabilize the soil, and provide protection from erosion.

Noise Control and Privacy: Use a thick stand of bamboo to block an unsightly view and control noise that may drift across your property from a road, factory or another source of noise pollution. Once it begins growing, after becoming established, you may find it ideal for your situation. You may grow it in combination with other plants that provide these options more quickly.

What Else Should You Know About Growing Bamboo? 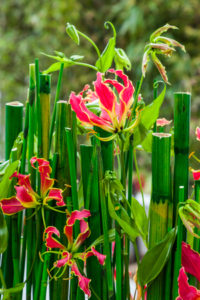 So what does this mean to you, the home gardener, attempting to grow bamboo in the landscape? First, know that you are dealing with a potentially invasive species. While you may desire a large colony of this specimen growing in your yard, the next owner of the home may not feel the same. Often, a patch of this plant or any potentially invasive, rapidly growing plant can undermine the sale of your home.

Consider that the rapid spread may cross property lines and cause problems with neighbors. Perhaps, growing bamboo in the landscape is best accomplished in containers. You can actually bury a large container, such as a washtub, and plant the bamboo in it to slow and somewhat contain the spread.

Realistically, perhaps you should grow the bamboo in an above ground pot, keeping it cut back and repotted as needed. Choose the variety of bamboo carefully, especially if you will grow it in the ground. Clumping bamboo spreads more slowly than running bamboo.

Invasive species of plants, such as bamboo, can disrupt and overtake the growth of native plants in the landscape. Over time, these plants are likely to escape cultivation and spread to the forest and/or many other areas where they are unwanted. Native plants are important to the environment as they provide food and shelter for wildlife.